Home | The markets and the Fed’s first hike

The markets and the Fed’s first hike

The first hike often gave a direction for rates and stocks. We look back at the last four bull cycles to illustrate the current risks.

The Fed’s monetary strategy plays a determining role for the financial markets. The first hike often gave a direction for rates and stocks. We look back at the last four bull cycles to illustrate the current risks.

The importance of communication

1994: the textbook case of a surprise hike 7 hikes totaling 300bp over one year

In 1994, the US economy was recovering from the 1990 recession, an oil shock and the ensuing military intervention in Iraq. The Savings & Loans crisis, lurking since the monetary tightening of the early 1980s, darkened the picture forcing the government to support the financial sector following the adjustment of real estate prices. There follows a jobless recovery typical of the hysteresis effects of a financial crisis. The sluggish economic recovery forced the Federal Reserve to be cautious before kick starting the rate cycle.

The Fed Funds rate had been cut to 3%, around the level of current inflation. Zero real rates represented then a very accommodating monetary policy stance given the memory of the risk of inflation and high real rates in the 1980s. In addition, the Federal Reserve still had a quantitative target for the monetary base. As a deep recession hit Europe in 1993, market participants debated when the Fed would initiate its monetary cycle. Another peculiarity of the time was that the Fed did not issue a press release following the FOMC. With hindsight, the experience of 1994 tightening led Alan Greenspan to take steps to improve Fed communication.

When the Fed raised its rate for the first time on February 4, 1994, hike expectations disappeared and rate volatility largely subsided. This is therefore a major surprise, especially since the cycle will be far from linear: three increases of 25bp then two of 50bp, a new one of 75bp and a last movement of 50bp for a total of 300bp in one year. The erratic Fed action through 1994 indeed had a memorable impact on markets.

The following graph shows the evolution of the yield of the 10-year T-note, the slope of the curve (2-10 year spread), the spreads of the then developing IG credit market, over a period ranging from 60 working days before the first increase to 60 working days later. Date 0 represents the day of the first increase in Fed Funds. The second chart looks at the S&P 500, the dollar against a basket of currencies (DXY index) and the price of an ounce of gold. The series depict changes in basis points (1st graph) or in percentage (2nd graph) relative to their level on the day of this first increase. 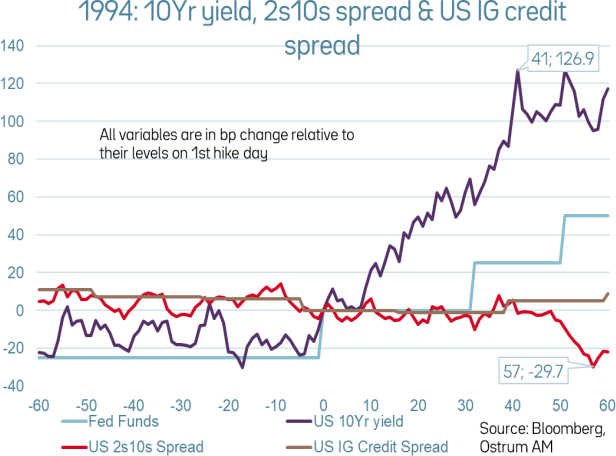 The 25bp hike on February 4, 1994 triggered a bond market crash. The US 10-year yield rose 127bp in two months’ time (at day 41). As often during tightening phases, the yield curve flattened. The 2-10 year spread therefore fell by 30bp on the 57th day after a 3rd increase. Credit spreads were unchanged. 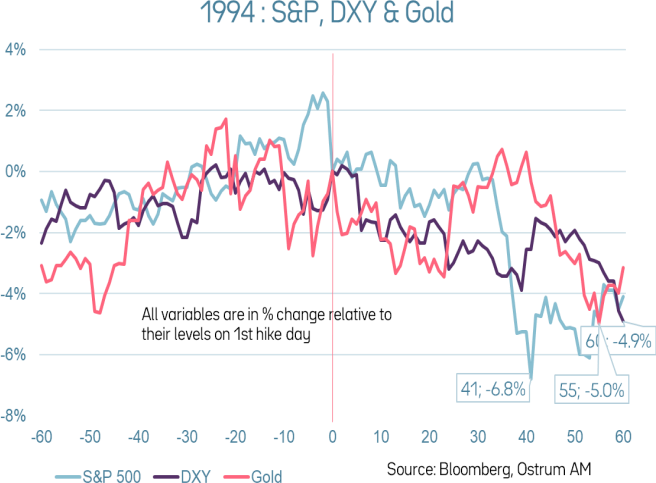 On the equities side, the upward acceleration in bond yields is mirrored by a drop in the S&P 500 (-6.8% on day 41). The first increase in Fed Funds hence weighed on stocks. Finally, it is interesting to note that the rise in Fed rates has been rather unfavorable to the dollar. The greenback lost nearly 5% in two months following the first rise. Gold is hit by the rate increase dropping 3% in three months. Monetary tightening undoubtedly reduced perceived inflationary risk.

1999: strong growth and insufficient tightening 6 increases for 175bp in total over 11 months

The cycle from June 1999 to May 2000 includes six increases, including five of 25bp then a final move of 50bp. The series of rate hikes then corrects a movement of relief comparable to an insurance policy against the impact of the external crises of 1997 in Asia (Thai baht devaluation) and 1998 with the default of Russia. The fall in stocks in the summer of 1998 and the bankruptcy of LTCM maintained a high level of uncertainty, but growth had remained very strong thanks to the productivity gains brought about by the diffusion of new communication technologies. 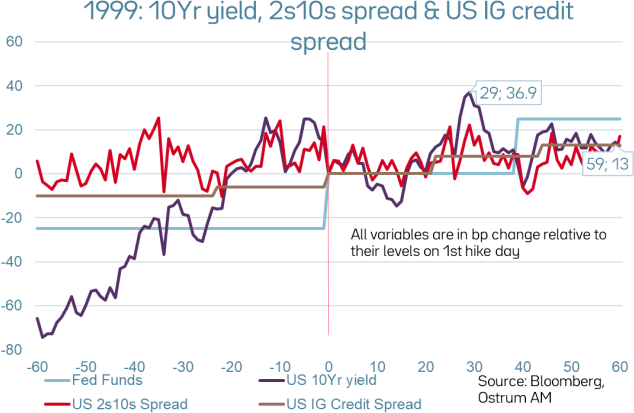 Long bond yields had correctly anticipated the Fed Funds hike and the entire curve had adjusted. At its peak, on the 29th day, the 10-yr note yield had nevertheless gained 36bp compared to the initial movement on June 30, 1999. Credit spreads widened slightly by 13bp over 3 months. 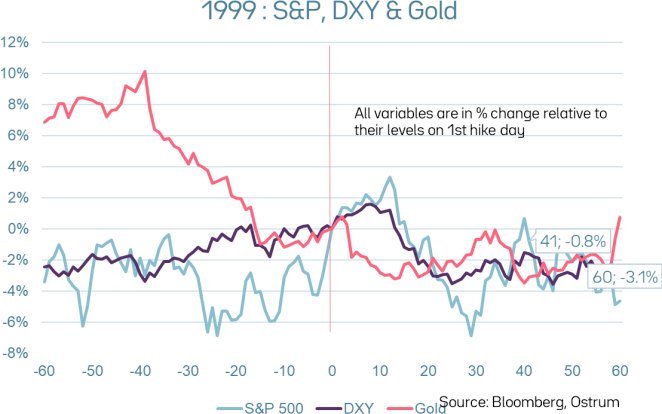 The hike in interest rates in June 1999 initiated a period of volatility and the S&P 500 fell by nearly 7%. The effect on gold is also immediate (-3.2% on the 13th day) but the bulk of the decline is observed earlier in the cycle, as market participants take into account the risk of higher interest rates. Once again, rising rates are causing the dollar to adjust lower.

The 2004 cycle seems to echo the experience of 1994. The US economy is emerging from a long bear market initiated by the technology stock collapse, a significant number of defaults with spectacular bankruptcies (Enron, Worldcom) and the war in Iraq. After the 2000 to 2003 purge, the Fed wanted to be as transparent and predictable as possible. This cycle established the primacy of the financial cycle over the management of the economic cycle. Alan Greenspan distills warning messages of a hike well in advance speaking of a “considerable” period (7 months), then patience (3 months) before committing a series of ‘measured’ increases of 25bp at each committee during two years. There were 17 rate moves to raise Fed Funds from 1% to 5.25% over the life of the money cycle. 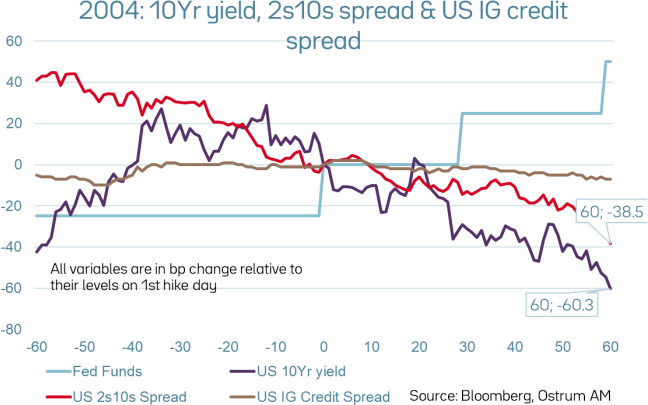 Transparency and the linear increase in Fed Funds in fact was a monetary policy error. The lack of uncertainty regarding the path of interest rates squeezed term premiums as the recycling of the current account surpluses of China and commodity-producing countries contributed to global excess demand for Treasuries, driving down bond yields. The ‘long-term rate conundrum’ according to Alan Greenspan is evidence of the failure of monetary tightening. The 10-year yield dropped by 60bp in three months’ time amid significant flattening pressure. Rate guidance well in advance of the first hike had already initiated the flattening trade. Credit spreads narrowed at the margin. The fall in risk and term premiums undoubtedly played a major role in the development of the subsequent financial excesses that triggered the 2008 financial crisis.

Whilst aiming at “tighter” financial conditions, the Fed instead attracted considerable foreign capital flows that eventually fueled ‘financial innovation’ resulting in the frantic development of “subprime” mortgages. In short, a textbook case of the monetary backlash.

The S&P 500 fell by as much as 7% on the 30th business day before recouping the bulk of losses. The ounce of gold, arguably deeply undervalued at the time, helped to hedge the weakness in equity markets. 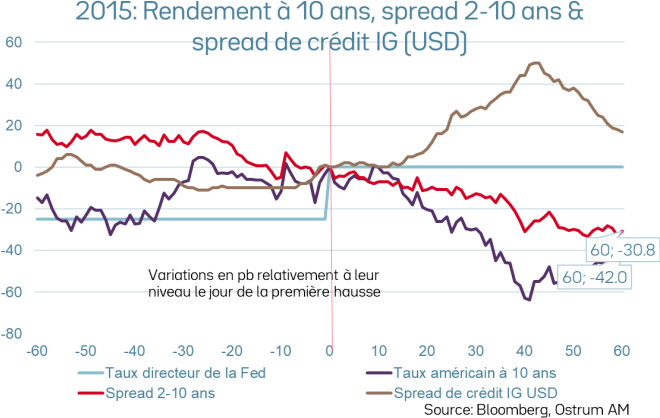 The December 2015 hike had long been delayed by Janet Yellen. The devaluation of the yuan in August 2015 seemingly posed a new threat to the global financial equilibrium. The trauma of the financial crisis was still present, and the lack of fiscal room for maneuver with a divided US Congress Arguably called for extended monetary easing. There was another operational difficulty linked to the successive asset purchase programs (QE1, QE2, twist, QE3, etc.). The Fed assumes significant duration risk that limits its ability to raise interest rates. In the words of Jean- Claude Trichet, it is not easy to put the toothpaste back in the tube. The Fed eventually hiked in both 2015 and 2016 before accelerating the pace of rate rises and allowing the balance sheet to wind down, always predictably.

As in 2004, the rise in Fed funds sparked a sharp flattening of the yield curve, as Chinese growth showed signs of weakening and the fall in oil prices reduced inflation. On the 41st business day, the yield on the T-note had dipped by 64bp from its December 15th close. The plunge in interest rates pushed credit spreads wider mechanically (+50bp mirroring the fall in yields) but the primary credit market remained open even as a wave of defaults hit the oil sector. 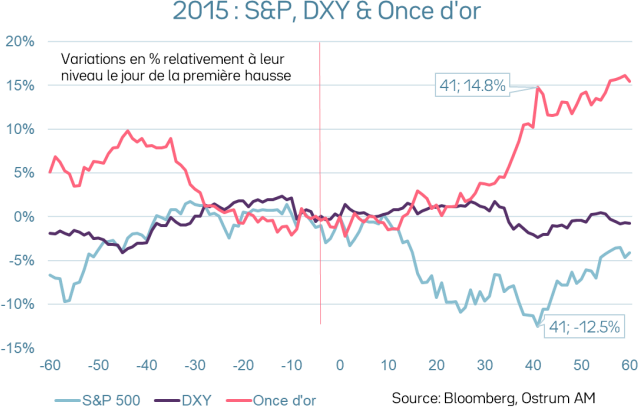 With the 2015 rate hike coming amid a troubled international climate, stocks lost as much as 12.5% in two months. Gold has played its role as a safe haven, perhaps in reaction to the previous Chinese yuan devaluation and dollar weakness.

A study of the market reaction to the first Fed Funds hike reveals some regularities. An unexpected rate hike favors an increase in long rates (1994). Conversely, transparent guidance ahead of the rate cycle tends to be followed by a decline in the 10-year yield (2004, 2015) as the term premium shrinks. Credit tends to under-react to the change in long-term rates. Stocks may plunge 7% to 12% in the two months following the initial rate hike. Lastly, the US dollar weakens on average as the money cycle begins.

The central banks have no possibility of easing financial conditions

It is possible that the end of the year will bring some good news with a gradually lower inflation in the United States and a positive impact of the various Chinese stimulus plans.

The Fed should moderate its normalisation process in 2023

Sticky inflation and an optimistic outlook for the economy sustain the Fed ’s hawkish stance. Rates should peak at 4.75% in Q1 2023, but we expect a first cut by the end of next year.

For the third time since summer, hopes of an imminent Fed pivot have triggered market relief.
NEWSLETTER
If you want to keep up to date with the latest news from the asset management industry and all our events, subscribe now to our newsletter.
Subscribe

⬆ Has the inflation peak been exceeded? The misleading base effect

🗣️ESG: Three Chords To End The Cacophony
Read the analysis by @candriam