Home | Deterioration of the economic environment

Deterioration of the economic environment

In such a situation, the real incomes of households as well as the profit margins of many companies fall, which has a negative impact on private consumption and investment, and thus on economic growth.

Unless the situation escalates the impact of the war in Ukraine on the global economy is mainly through the rise in commodity prices. This increase, primarily in the cost of energy, is adding to inflationary pressures and is likely to keep inflation higher for longer.

In such a situation, the real incomes of households (and thus their purchasing power) as well as the profit margins of many companies (and thus their profits) fall, which has a negative impact on private consumption and investment, and thus on economic growth. The spectre of stagflation is therefore resurfacing, particularly in Europe.

This war also comes at a time when central banks have decided to change their attitude towards monetary policy. While for a long time they considered the rise in inflation as a temporary phenomenon that did not require intervention on their part, they started to change their discourse towards the end of last year. While only a few months ago they were ruling out any rate hikes in the first half of 2022, they are now considering a fairly aggressive monetary tightening, starting with the Federal Reserve. The markets are now counting on 5 to 6 rate hikes by the US central bank in 2022. In the euro zone, a first increase in the cost of money is expected in the second half of 2022. However, this will depend on the evolution of the economic situation.

The deterioration of the economic situation and the change in attitude of the central banks are naturally leading to a rebound in volatility on the financial markets and a rise in the risk premiums demanded by investors. Higher risk premiums mean lower valuation multiples. The decline of around 7% in the MSCI World index (in euro) since the beginning of the year should therefore come as no surprise, and in fact even seems quite moderate. This is all the more true because, unlike the major corrections of recent years, the decline in stock prices has not led to a fall in bond yields, which have continued to rise.

Evolution of the world equity index (in euro)

On a regional level, the US market held up much better than the European markets, benefiting from its safe haven status and the fact that the US economy is less affected by the war in Ukraine than the European economy. Safe havens such as gold, the Swiss franc and the Japanese yen have fully fulfilled their role as shock absorbers since the outbreak of hostilities in Ukraine and have performed positively.

What are the implications for equity markets?

The outlook for equity markets has darkened in recent months. If investors demand a higher risk premium for investing in equities, either the risk-free rate will have to fall (however, as mentioned above, interest rates are currently trending upwards) or the expected return on equities will have to rise (which in principle means that valuation multiples will have to fall). Longer term, it is also worth noting that the factors behind the inflation of financial asset prices over the last few decades are starting to reverse:

All this at a time when valuation multiples are high and irresponsible central bank policies have encouraged a massive move into risky assets.

Does this mean that we should completely abandon equities? The answer is clearly no! First of all, while it is true that interest rates seem to be on the rise today, everything suggests that this rise will remain relatively moderate (and the risk of a pronounced economic slowdown following recent events could temper the ardor of central banks).

More specifically, interest rates are expected to remain negative in real terms (adjusted for inflation). An environment of negative real interest rates is not unfavorable for equities. Especially since in such an environment, money market and bond investments are not really an attractive alternative.

More fundamentally, there is the fact that it is simply wrong to think of stocks as a homogeneous asset class, so questions like the one raised above are meaningless. The purchase of a stock should correspond to the acquisition of a long-term stake in a company. The questions that an investor should be asking therefore revolve around the quality of the company (does it continuously generate a return on capital employed that exceeds the cost of that capital, thus creating value for its shareholders) and the price paid to acquire this stake. This way of thinking is obviously in contrast to the current trend towards passive management. Based on the historical relationship between valuation levels and subsequent returns, the returns to be expected from the main stock market indices in the coming years are likely to be very low indeed.

In view of the above, stock selection will be very important in the years to come. The selection criteria should revolve around the following findings:

In markets that like to distinguish between ‘growth’ and ‘value’, these criteria clearly favor the ‘growth’ style.

In summary, we continue to believe in equities, provided one is selective, adopts an appropriate investment horizon, adjust one’s return expectations and accepts higher volatility.

A word about gold and gold companies

Gold has fulfilled its role as a safe haven in the current conflict, with the price of the yellow metal appreciating by 12% between the end of 2021 and March 8, 2022, while over the same period the global equity index has declined by about 10%. While at times gold companies are more closely correlated with the stock market than with the price of gold, this was not the case this time and the prices of these companies amplified the movement of the yellow metal, providing additional protection to investors.

Trends in the price of gold, the global equity index (in USD) and the gold company index since the beginning of the year 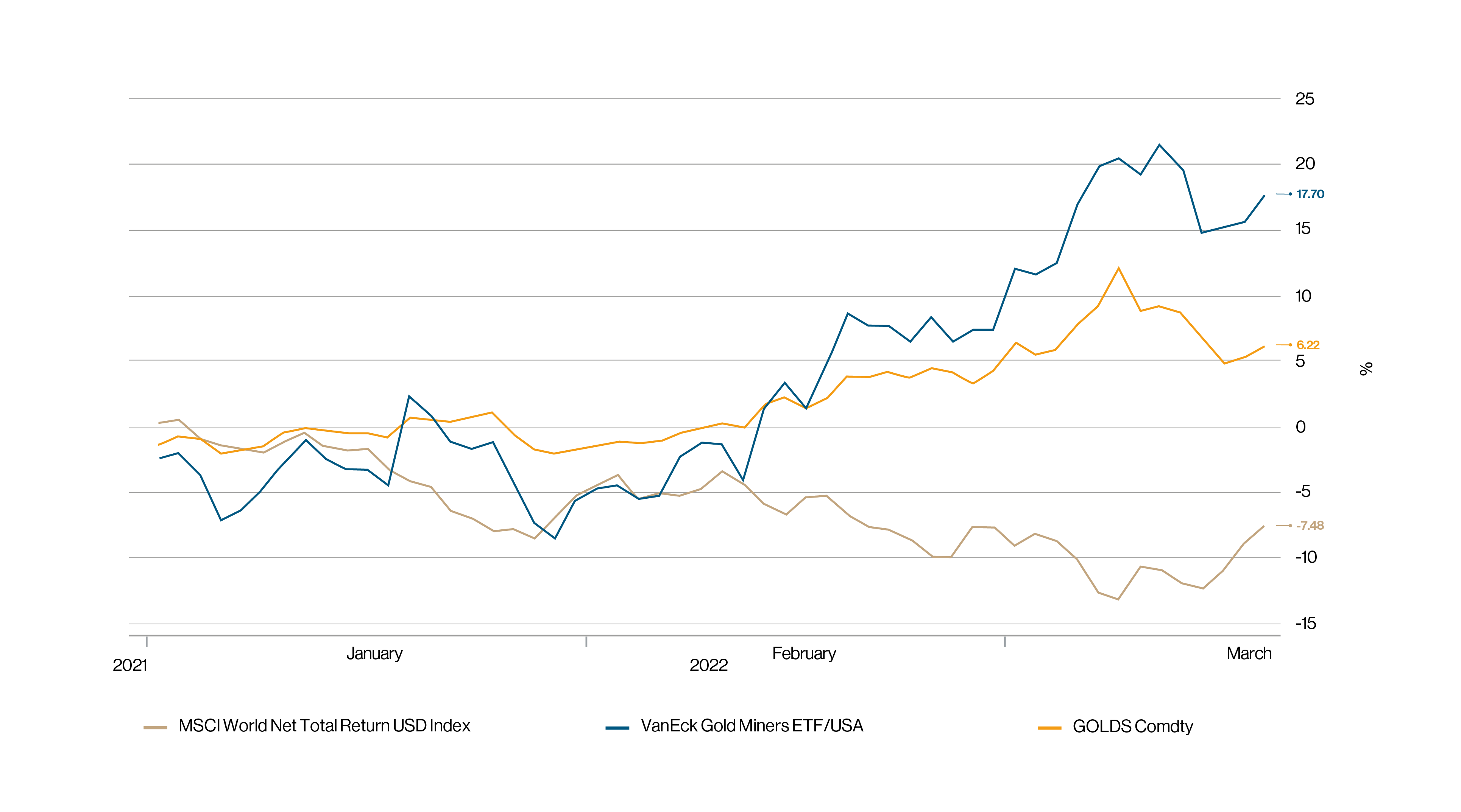 The outlook for gold remains favorable, although one should be aware that a quick end to the war in Ukraine could lead to a fall in its price: interest rates are expected to remain negative in real terms and geopolitical risks are higher than in the past. In addition, the sanctions against Russia are likely to reinforce the desire of a number of countries to reduce their dependence on the dollar and the willingness of China to offer an alternative to the current financial system based on the US currency. These developments should increase the demand for gold at a time when its supply will not increase by much in the coming years.

Outlook for the commodity sector

Nitesh Shah, head of commodities & macroeconomic research, Europe in WisdomTree, analyzes the outlook for the commodity sector, where recession may be a red herring for a market fuelled by a supercycle.

The case for disruptive materials

In the current economic environment, disruptive materials stand out as key drivers of long-term growth in the clean energy and digital transition.

The solid experience provided by the arrival of Nico Thill and ongoing presence of Cédric Lenoble on BLI’s Executive Committee are also an excellent opportunity to amalgamate BLI's teams around key areas of expertise.
NEWSLETTER
If you want to keep up to date with the latest news from the asset management industry and all our events, subscribe now to our newsletter.
Subscribe

🗣️ Where is there value in fixed income? By @PictetAM

👥 To finalize #FundsExperience Lisboa, our attendees have one to one meetings with the fund managers who have been ...part of this VIII Edition #RankiaProEurope

🗣️ The reference event of the investment fund industry continues on #FundsExperience Lisboa, with @LazardGestion ...and its Managing Director - Head of Fixed Income Eléonore Bunel, who offers all the details of the Lazard Credit Opportunities